Just when you thought the custom sportbike world had seen it all, Parker Brothers Concepts goes and blows it wide open…the hubs, that is.

«Everyone loved the dual hubless wheels on the Neutron bikes, so we decided to create a bolt-on kit to convert any sportsbike into a hubless design», the Parker Brothers said.

If the massive hubless wheels on this 2001 Yamaha R1 look familiar, that’s because you probably saw them on the Tron-inspired Neutron bike. Remember that weird cult-classic/futuristic flick, Tron, well Disney remixed it in 2010 and the movie bike was so crazy that the Parker Brothers decided to create a rolling replica loosely based on the two-wheeled movie star.

Many have tried the hubless movement without luck, as these show stoppers were more for looks than riding. The act of ditching the hub, an integral part of the wheel and suspension on a bike, not only caused an unstable mess that was brittle and unpredictable, but these early hubless kits from others in the industry were also beyond expensive. 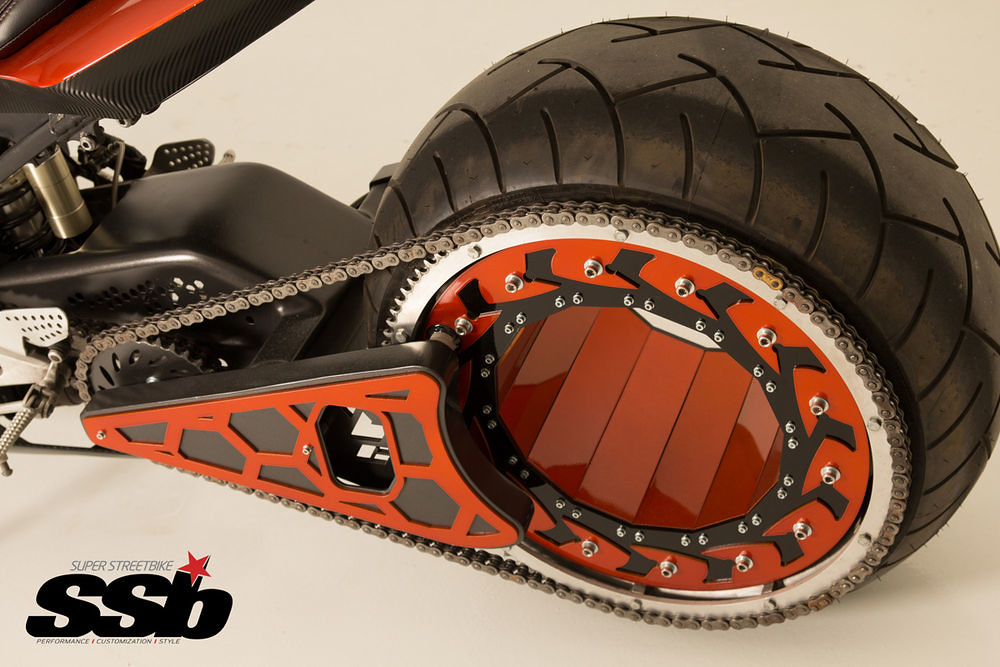 «We’ve built many crazy and unique vehicles that most considered impossible for clients like Universal Studios, 50 cent, John Cena, Lil Wayne, Flo-Rida and many more», they explained.

But what about us, the average Joes? What if we want to go hubless? «The Vacio Wheel Kit is a hubless wheel kit that can be ridden at high speeds without bearing failure. It rolls as quiet as a factory wheel.

It bolts directly to most sportbikes without fabrication using factory hardware and you don’t have to be a rock star to afford it either», they said.

The hubless wheel kit also sports something many of its predecessors lacked; working brakes. Hidden inside the wheel is a perimeter disc setup with a hydraulic caliper that’s said to bring the beans with the pull…err, squeeze of a finger. 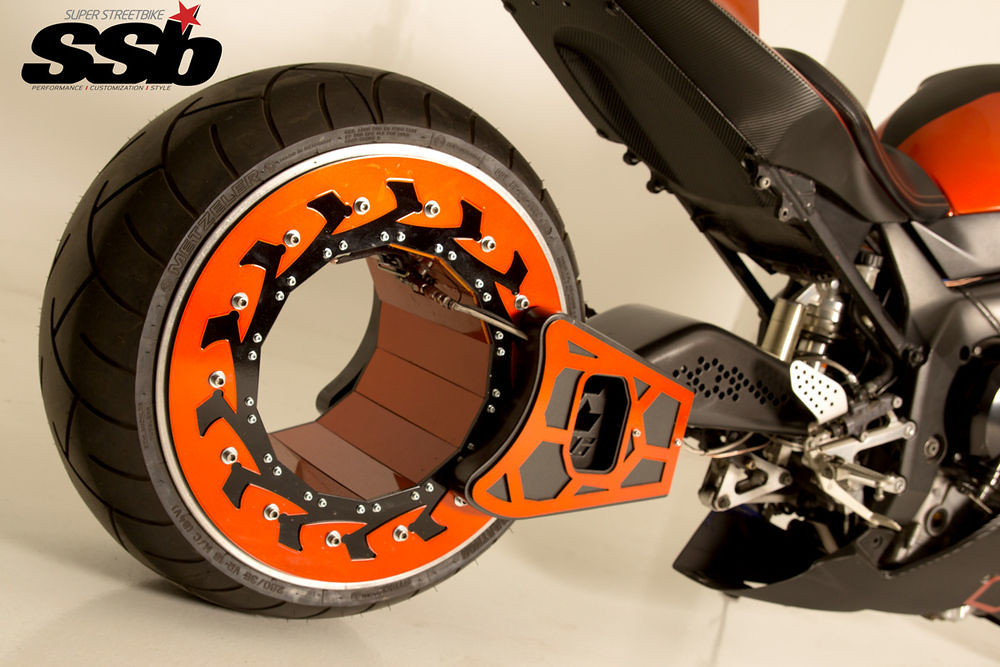 The standard forks were replaced with a girder style front end for a unique look without compromises to ride quality just as the extended rear swingarm has a gear compensation sprocket that balances the giant rear sprocket for factory-like ratios. When the brothers were asked to buck up or shut up, they used their personal R1 as the test platform, and the end result is unlike anything we’ve seen.

All hubless parts aside; the rest of the ensemble is equally exquisite but surprisingly simple. In addition to a plethora of black and orange powdercoat, 3M carbon fiber and metallic orange vinyl wraps much of the stock bodywork and a keen eye will also notice some well-placed pieces.

«We kept the custom parts to a minimum since the rest of the bike was so wild, but other aftermarket parts include Wilwood calipers, smoked headlights, and flushmounts along with custom black billet mirrors and some frame sliders», they explained. While little on earth might overshadow these wild wheels, we did our best by inviting Matia Spencer to pose atop the hubless wonder. As for who’s the star of the show, you be the judge. 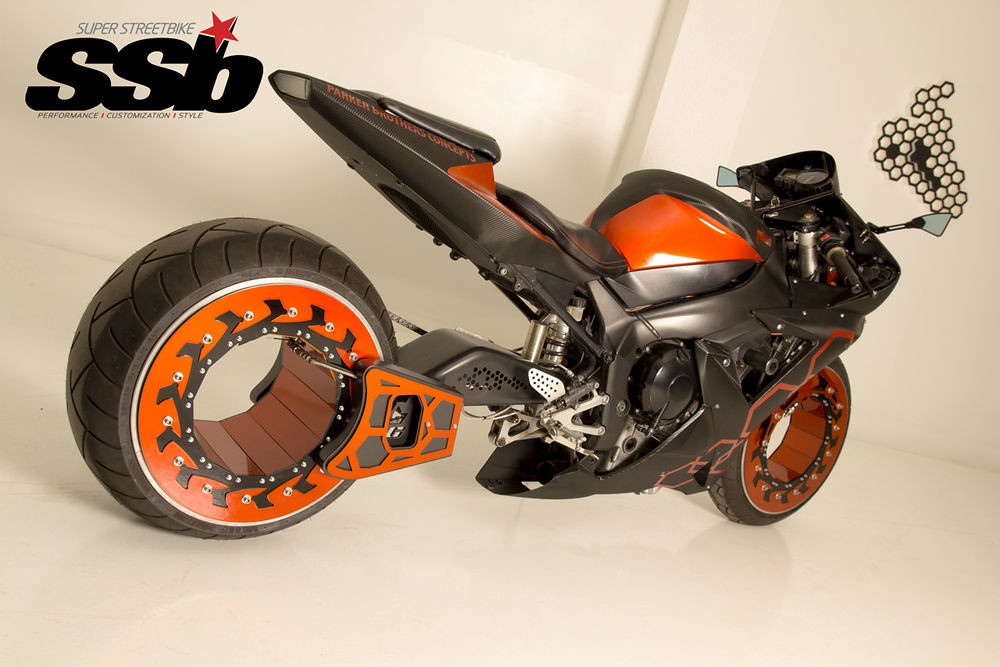 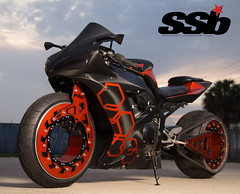 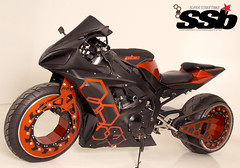 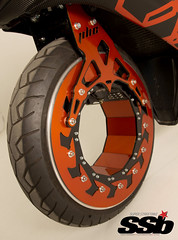 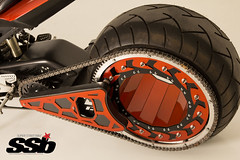 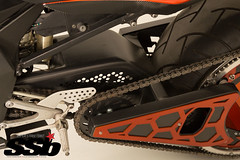 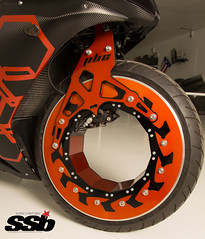 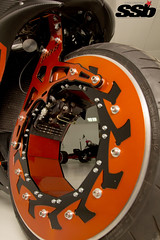 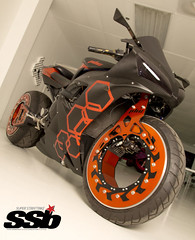 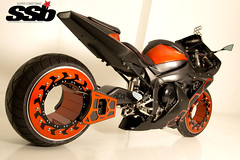 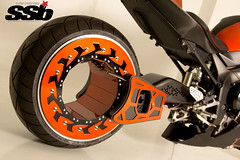 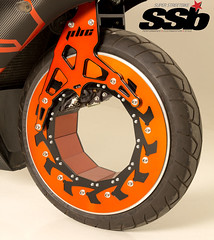 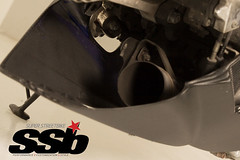 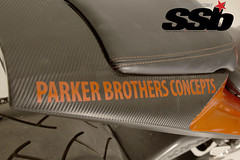 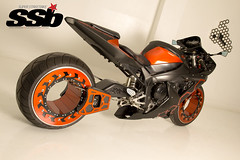 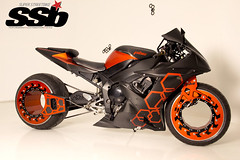 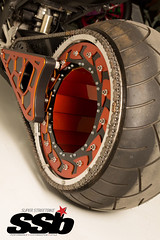 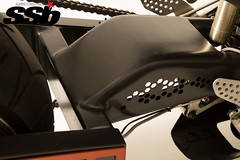 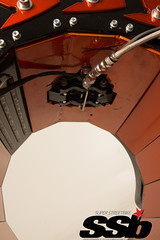 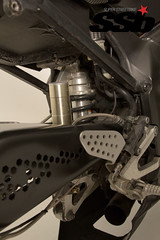 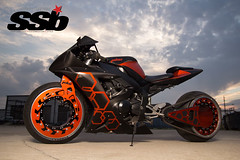